Something that can actually make you a better rider are the tires that you put on your dirt bike. Now, don’t get me wrong… mounting a new set of even the best dirt bike tires is not going to bump you up from novice to expert, but having the right tires makes a difference.

There are tires that are made to handle just about everything you throw at them, but in order to get the best results, it’s best to dress (your bike) for the right occasion. For example:

All this comes into play when picking the right tire. Because let’s face it, the best dirt bike tires for enduro races are going to be quite different than those for groomed motocross tracks.

The first thing you need to identify is the TYPE of terrain you’re mostly going to be riding in.

The goal is to match up what the tire is designed for with the type of riding you do.

A soft tire is generally going to provide better grip and traction on hard surfaces and in dry conditions. And the same is true for the opposite end – a hard tire will work better in soft soil.

It actually gets a little more confusing. Let’s move on.

Fully understanding the differences between the tires will not only make for better riding, but it will also save you a few bucks in the long run.

Although you will most-likely encounter some soft soil or patches of mud or sand, hard terrain tires are durable enough to handle the change and have plenty of traction.

In addition to hooking up great, the mixture of hard and soft rubber compounds and shoulder knobs on these tires help them last longer and perform better, making them the best enduro tire to buy.

Although a lot of things go into creating the perfect setup for hare scrambles, the tires are a huge component that can be a difference maker.

Most terrain on hare scrambles consists of plenty of rocks and roots, as well as interesting wooded areas. But yes, there are going to be some patches of sand or mud that you’re going to have to navigate.

That being said, intermediate and hard terrain tires are generally best suited for these cross country type of rides (probably hard terrain, even more so).

The extra durability of hard terrain tires is hard to beat.

However, I tend to stick to an intermediate terrain tire. I’ll share with you the one I’ve been running below. 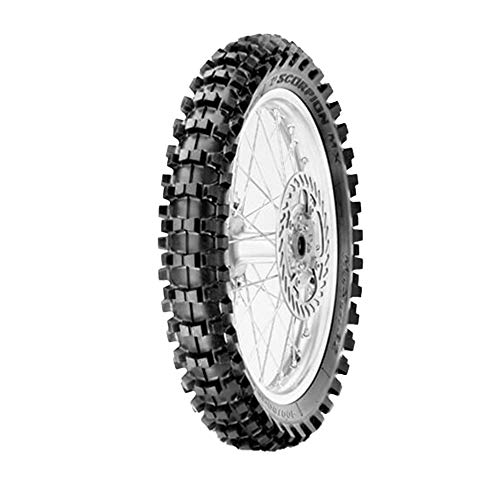 The MX32 rear tire has a very good tread pattern designed to excel in sand and mud. The wide paddle design is highly effective at keeping the tires clean and maintaining traction on very soft soil.

But the traction that you get from the MX32 doesn’t just extend to soft ground; it also provides good control when braking which is highly important on muddy tracks. Because the knobs are rather long, their ability to dig deep is off the charts.

Just make sure to run the recommended tire pressure or it will be susceptible to pinch flats.

The level of durability on harder terrains could be better given the slightly higher price tag, but then again – it’s a soft terrain tire. 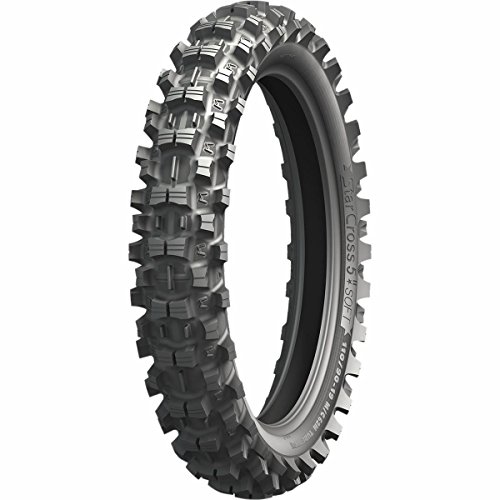 The Starcross 5 motocross tires are very well made. I wouldn’t say that they have the longest life, but that’s hard to judge 100% accurately since I’m not too easy on my tires.

The spacing between the knobs is pretty good although it is not as wide as other tread patterns in this category. The tire comes with good durability and protection against flats.

In the past, Michelin wasn’t known for making the best dirt bike tires. Pretty good, but not the best. This newer Starcross 5 series now a serious contender. 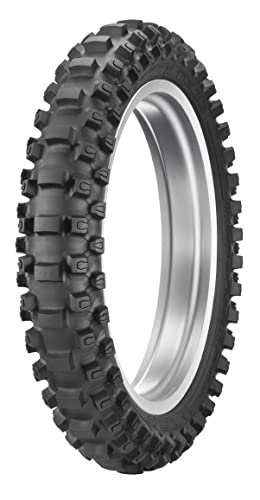 Dunlop is no stranger to producing high quality dirt bike tires. In fact, many factory motocross bikes come loaded with Dunlops for both the front tire and rear tire.

This tire is pretty-darn impressive. As you can see from the tread pattern – this tire is designed to tear it up in the sand and soft terrain… literally. The tread patter is very aggressive and this thing hooks up.

The surprising aspect (in a good way) is how well the tire holds up and how smooth it rides. Despite the large spacing between knobs, the tire rides decent and tracks straight. 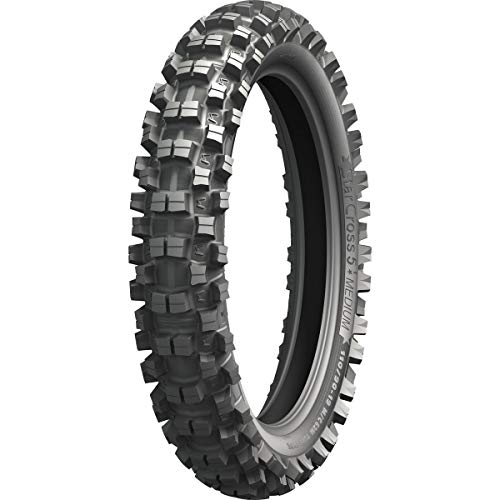 I’m rating this as my number one choice for an intermediate terrain tire because I’m running it on my bike now and I really am pleased with it.

The intermediate terrain version of this tire is very similar to the soft terrain one. One thing that I really alike about these Michelin tires is that they are so versatile. They’re designed to perform well on a wide range of different soil types and conditions. 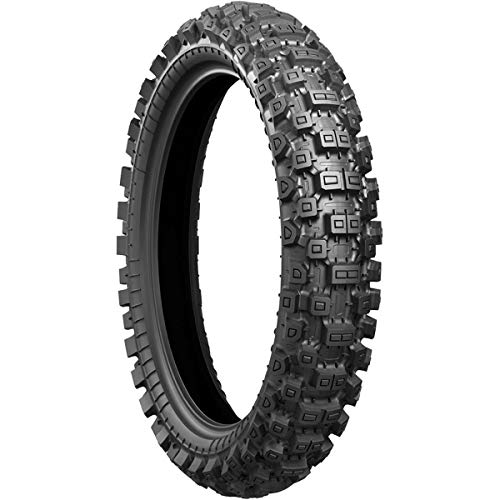 The X40 tire offers good stability and traction on both soft and intermediate terrain. These Bridgestone dirt bike tires have one of the better-designed tread patterns but it does have a short life if used too much on hard terrain.

The rubber compounds on these are designed for both MX and SX tracks. The control around corners is one of the best features.

The tire boasts tall knobs for traction and has shoulder steps and increased base angle radius for a nice, stable ride.

The Geomax MX52 is a tire suited for demanding Supercross and MX riders and terrain. While it is somewhat expensive, these Dunlop motocross tires also sets a high standard when it comes to traction and bike stability.

The compound is durable and has good wear and tear resistance for a wide range of tracks. But it’s the corner traction that sets the tire apart from the competition. This is achieved by Dunlop’s block-within-a-block knobs. This is what adds the most appeal to the tire.

At the same time, superior bump absorption is achieved through the damping rubber sidewall. With extra flex in the knobs, a unique block pattern, and a high-end compound, the MX52 is one of the most complete intermediate terrain tires.

I’ve ran these in the past and they work great. 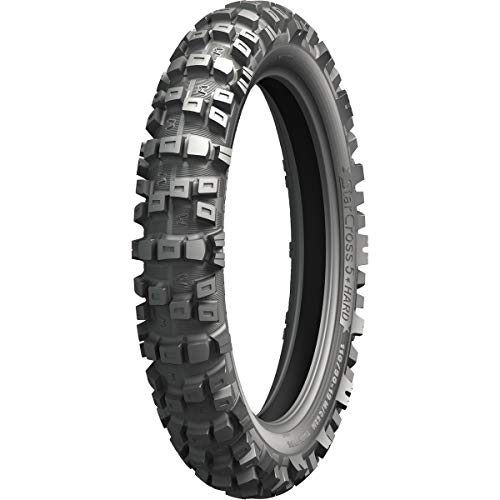 Well, what can I say? I really do like these Michelin tires.

The Starcross 5 Hard terrain tire has got a lot of things going for it. It’s engineered for improved acceleration, braking, and steering control. The tread design on these MX tires works great when the tire is vertical (while you’re going straight) and tilted (cornering).

The Starcross 5 is designed for experienced motocross riders who need the best performing tires, however, even beginner riders and aspiring pro riders can benefit greatly from running these as well. 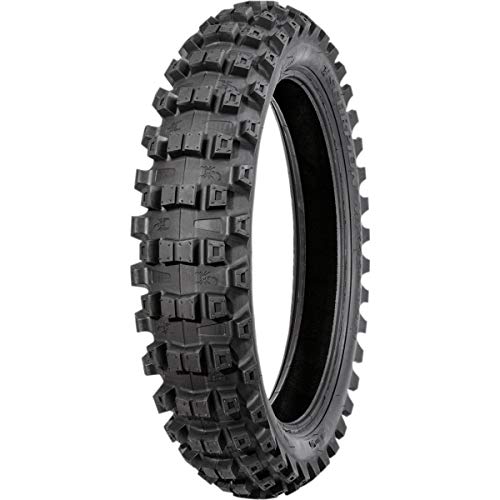 For a mid-hard tire, these are fairly knarly and they hook up great. These Pirelli dirt bike tires have been designed with a new tread pattern that performs well on intermediate to hard terrains.

The tires grip well on straights and in corners and thanks to the tread pattern and tire construction, they last fairly long and are resistant to tearing.

If you race, you’re really going to appreciate the launch that this tire provides off of concrete starting pads. And if you don’t race, I think you’ll really like how long this tire lasts and how well it performs on a wide range of terrains.

Overall – this is a solid pick and highly recommended. 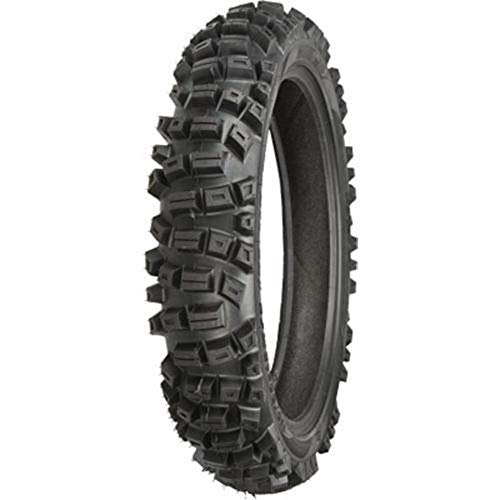 This is a hard terrain rear tire that features a cross-patch tread pattern to maximize cornering traction. The knobs are quite stiff and also big, even by hard terrain dirt bike tire standards. This ensures decent bites on rocky and wooden tracks.

Although the large footprint is what makes the Sedona MX907HP worth the big bucks, the durability is also worth pointing out, as is the versatility. The MX907HP can be used with or without a Tubliss tubeless system which makes it appealing to virtually all riders.

Assuming proper pressure, the MX907HP should work really well on most of terrain, including hare scrambles.

Even though it may struggle a bit with mud, it seems to provide solid traction over sand and good acceleration when climbing out of ruts.

Which Dirt Bike Tires Should You Buy?

Knowing what type of trail or track you’re going to be riding is very important if you want the best traction. When in doubt, you can always just go with an intermediate terrain dirt bike tire (that’s usually what I do) to give you enough acceleration, traction, and stability.

And don’t worry – you’ll be able to ride wheelies and clear doubles even if your tire isn’t perfectly matched up to your riding conditions for the day.

In the end, any of these tires – and quite a few I didn’t even mention – are solid tires and won’t steer you wrong… pun intended. 🙂